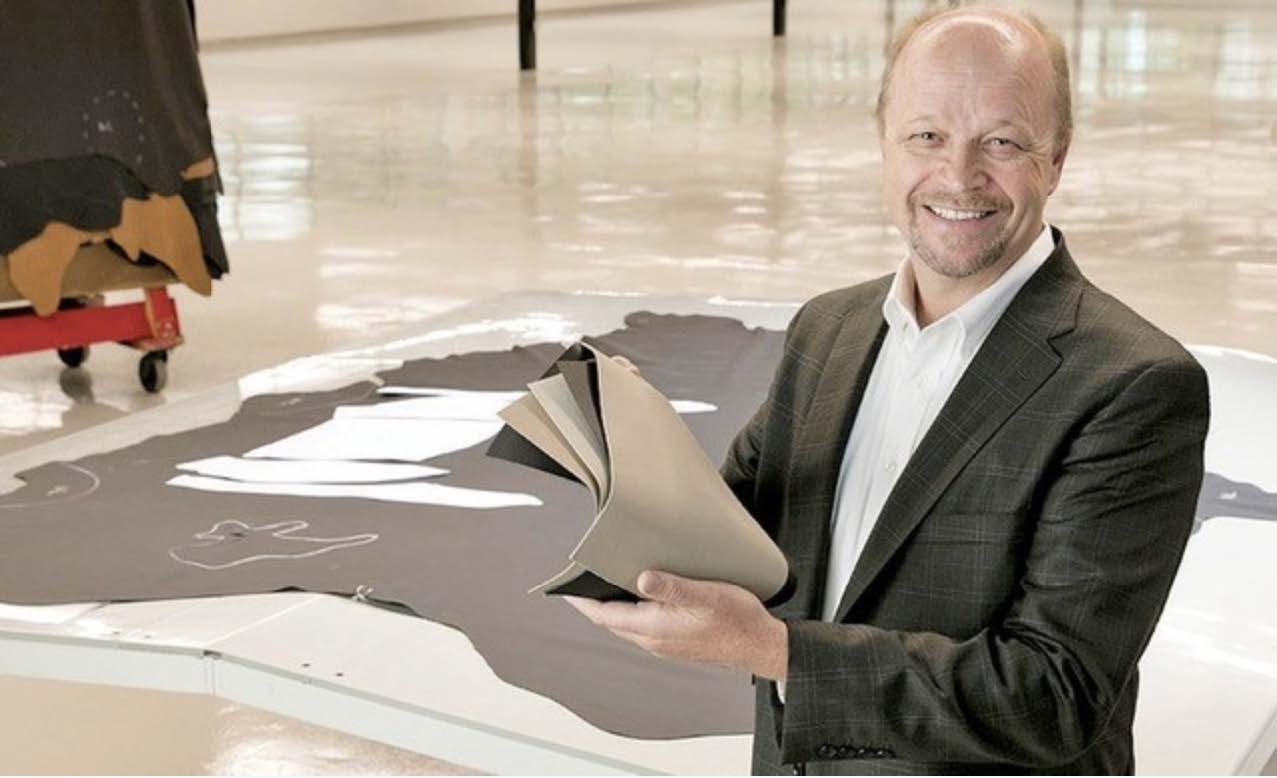 The old leather maker that wouldn't give up

If you unwrap a gift box this holiday season and find a pair of fashionable leather shoes inside, think of Randy Johnson.

The CEO of GST AutoLeather in Rochester Hills, Mich., has nothing whatsoever to do with leather shoes.

But fine shoes, as well as chichi leather designer jackets and cushy leather sofas, have something to do with him: The companies behind those good-smelling consumer goods are crowding in on him as he works to turn around the iconic automotive leather supplier.

"Many competitors that traditionally have not bothered to pursue the automotive sector, because it's a tough space to be in, are making an effort to enter it," said Johnson, a 57-year-old engineer who has spent much of his career trying to make companies and factories operate better. "So we have to make ourselves more competitive."

Johnson, who hails from South Dakota's Black Hills mining country, started his career as a proving-ground test engineer for Chrysler cars, specifically because he wanted to work for Lee Iacocca. After years of covering the spectrum of auto industry jobs ' at Chrysler and various suppliers, in sales and marketing, product development, factory management ' Johnson stepped into GST when the company crashed. Overstretched and mired in debt, it appeared to be the end of the story for a company that had been supplying the auto industry since 1922 and formerly operated in the U.S. as Garden State Tanning.

"It's still fresh," he said of GST's 2017 Chapter 11 bankruptcy and the efforts to work its way off the industry's watchlists of troubled suppliers.

But two years later, in a story worthy of an uplifting holiday movie, GST is back ' winning new vehicle programs, proposing new approaches to create leather auto interiors and transforming itself into a lean global competitor.

"We're rebooting the company," Johnson told Automotive News. "We didn't just bring in different people. We came in with a different leadership approach. The people who ran GST in the past were good people. But I believe the way it was run before wasn't the right way. So we're taking a new approach."

The company's leather surfaces adorn the new Kia Telluride and the vehicles being built by Ford Motor Co.'s joint venture with Jiangling Motors in China. GST leather also rides on the new-generation Mercedes-Benz GLE and the Lexus RX crossover.

Putting GST back in business ' by supplying the material for interiors in nameplates ranging from the full-size Ram pickup to the Mercedes-Benz S class ' has been a two-pronged campaign.

The company embraced the Toyota Production System management approach, known throughout the industry as TPS or lean production, in an effort to standardize every aspect of its operations. Johnson, a longtime devotee of the Toyota philosophy, introduced 30 to 40 new "metrics of performance" this year, covering how GST operates its global factories, accounting departments, finance, sales and marketing, and human resources.

At the same time, GST is repositioning itself away from leather as a vehicle commodity. The company said this year that it is "no longer a supplier of flat hide leather." That essentially means that GST's products will move up a notch in the automotive supply chain.

The company is committing about $5 million to new r&d offices in suburban Detroit where researchers will delve into how leather surfaces can be applied in a new era of vehicle trends, making them lighter in weight, perfecting how they adhere to seats made from new materials and developing new features such as quilting and perforations.

"In the past, we didn't invest in r&d to the degree we should have," Johnson said. "But we're making a significant commitment now. We want to be the ones to tell our customers what kind of leather to put on their seats. We want to be the go-to leather guys because of our knowledge of leather. We want the industry to call us for advice on materials or lamination."

The company's troubles in 2015-17 were partly the result of rapid growth. GST had been expanding overseas through the 1990s to establish the leather processing operations needed to keep pace with its customers. In 2011, it acquired its well-established European competitor Seton, an older auto supplier that added a posh book of luxury customers to its client base.

GST later expanded into China, and it was there that price haggling with a third-party Chinese supplier of retanning and finishing services began to generate millions of dollars in cost overruns. The disputes resulted in approximately $24 million in unprojected cash outlays, according to U.S. District Court bankruptcy case documents in 2017.

Separately, GST made the decision to put itself up for sale. Black Diamond Capital Management LLC, a Connecticut private equity firm, pursued a plan to buy GST and retained Johnson to consult and help, based on his experience running factories and implementing TPS.

But as the year progressed, more problems emerged at GST, and potential buyers backed away from the deal.

When GST collapsed in October 2017, Black Diamond Capital stepped in to acquire it, bringing in Johnson, who had been overseeing plants for competitor Eagle-Ottawa, to run it.

Court documents indicate that GST itself was not entirely sure why the business was in trouble, beyond its pricing spats in China.

In one instance, the documents improbably blamed the advent of ride-hailing services such as Uber for causing a decline in global customer orders. In another, the documents spoke of falling world vehicle production in 2017, which was a time the global auto industry was booming. The company also blamed financial fallout from one unspecified European automaker changing its product acceptance standards and rejecting GST's deliveries.

"That's not what went wrong here before," Johnson asserted. "It wasn't product. It wasn't sales. Our product is outstanding. It was purely this: This was an organization that didn't give enough attention to eliminating waste and standardizing process."

As abstract as they may sound, "eliminating waste" and "standardization" are the unmistakable bywords of TPS, a somewhat ephemeral method copied by automotive companies around the world, including the Detroit 3. TPS proponents claim that pursuing those two goals, among other measures, will bring down factory costs, improve product quality, reduce workplace injuries and lead to various other benefits.

Johnson believes TPS is absolutely the road to a brighter future at GST, and that is how he intends to fend off competition from newcomers to the auto-leather trade.

GST employees are being asked to identify and attack wasteful daily practices and establish standardized global procedures ' spelled out on paper for all to see ' for literally every aspect of the business, including the factory floor, accounting department, sales office and customer price-quoting procedures. The standards describe how material is unloaded from a carton in a factory and how tools are cleaned. They specify how contracts are written, how sales pitches are made and how employees are hired. Every department is asked to eliminate waste ' not merely the production floor.

"There may be some discomfort when you ask a sales executive or a finance person to eliminate waste and bring better value to the value stream," Johnson acknowledged. "But it's a major cornerstone of our strategy as we move forward."

Over the past year, GST reduced its break-even point by 25 percent, said Tim Brennan, the company's global vice president for sales, design and marketing.

"That helps us become best in class, best in cost," Brennan said. "If we can't get there, we can't grow this business."

"The industry has entered an era where automakers are recognizing that there are some things that are better left up to the niche specialist ' like GST in genuine leather," said Upham, principal of Valient Market Research in Downington, Pa.

"Leather is just a complicated and difficult material. If GST can make themselves cost competitive and deliver top quality, then it should be a good decade ahead for them."

Along the way, GST has ample opportunity for product variations, shipping goofs, contract errors and missed sales opportunities. It supplies customers around the world with a natural material ' imperfect cowhides ' and relies on about 5,600 employees spread out in offices and plants in Europe, the U.S., Mexico and China. Johnson wants everybody singing from the same hymnbook, thus his push for global standardization.

"That has to be the starting point for a company that came through a difficult situation as we did," the CEO said.

Johnson declined to divulge many specifics about how GST is doing financially. Court documents at the time of the company's 2017 crash put GST's annual sales at $540 million. Today they are about half that, according to one outside estimate.

The automotive leather trade is not an entirely cheery sector for suppliers.

Industrywide, auto leather sales are forecast to be $3.2 billion this year, 29 percent less than five years ago. The rise of synthetics is growing as a leather substitute in vehicles at the same time.

Price competition in China and other Asian markets has pushed leather seats off the option list for many models. There also are burgeoning consumer trends for things such as "vegan interiors" that forswear the use of animal products in a car and "smart fabrics" that allow seat surfaces to monitor passengers and cabin conditions ' hardly an attribute for cowhide.

But there are promising trends. Most notably: Luxury continues to rise in the buying intentions of consumers around the world. And luxury and leather go hand in hand, Upham said.

And because of changes in global cattle supply and demand, unlike almost everything else in the auto business, the commodity price of cowhides has been falling in recent years. That creates momentum for more vehicle programs to entertain the possibility of leather seats.

But it's a double-edged sword. Lower hide prices mean suppliers are charging less money for their leather products than five years ago, which means lower revenue.

It also means lower revenues for suppliers of shoe leather and chair leather, which is one of the motivations for nonautomotive leather suppliers to try diversifying into the big-ticket auto industry.

As Johnson explains it, that's all the more reason to embrace the Toyota Production System, in hopes of bringing GST's operating costs down even more.

"After what we went through, there was a real openness here to try something new," he said.

"We're a different company now. We're humble. We have humility about where we came from, and we know where we want to go.

"Companies overthink this. Becoming lean is about bringing order and standard practices. We can make that transformation. The people here want to succeed at it."

Back to news archive